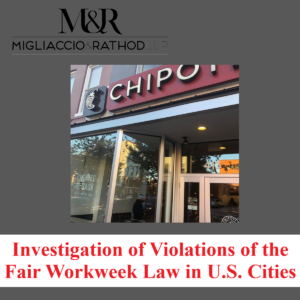 Migliaccio & Rathod LLP is currently investigating Chipotle, and other restaurants and retailers, for violations to the Fair Workweek Law which protects employees from unpredictable schedules. Employees of various restaurants and retail stores report that erratic work schedules are common, which disallows them from planning their lives. With last minute shift notice and sometimes too few shifts, cities around the country have implemented protections to give their workers a chance to live a more stable life. These cities include Chicago, New York, Philadelphia, San Jose, and Seattle. Depending on the law in the specific city, workplaces are responsible for things such as:

New York City already filed claims against Chipotle for violations of their Fair Workweek law which took effect in November of 2017. The city filed their initial complaint in 2019 involving a few of the stores in the city which resulted in minor changes in the fast-food chain. In a newer complaint, the Department of Consumer and Worker Protection alleges that the ALL of the 6,500 employees have been subjected to violations of these protections, averaging three scheduling violations per week. Additionally, the chain was unable to prove that they maintain and keep scheduling policies in place at all and evidence to the contrary shows that they failed to instigate the changes of the law until 2019, two years after its conception. The suit hopes to obtain $1 million in restitution for the employees at the five locations as well as fines for the violations.

We are particularly interested in the practices of Chipotle in Chicago but want to hear from any individuals who believe their rights have been violated under the protection of the Fair Workweek Laws of their city.

Are you an employee of a Chipotle in Chicago, or another restaurant or retailer in a city with Fair Workweek laws, and believe your rights have been violated?

The lawyers at Migliaccio & Rathod LLP have years of experience in class action litigation against large corporations, including in cases involving wage theft and unfair & deceptive trade practices. More information about our current cases and investigations is available on our blog.