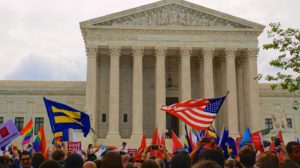 Last week, the Supreme Court affirmed through its examination of an act written in 1964, that LGBT employees are indeed protected from workplace discrimination. The decision in Bostock v. Clayton County marks an important step toward the ideal behind the phrase “Justice for All” and extends to another marginalized group workplace protections previously unprovided.

Put simply, the Court’s decision makes illegal the firing of gay, lesbian, or transgender employees simply because of their sexual orientation. By performing simple hypothetical tests to evaluate the justification behind the firing of LGBT employees, Justice Gorsuch deduced that a homosexual man and a heterosexual woman share the same sexual orientation, but not the same sex. Therefore, firing the homosexual man for the same attraction that he has as a heterosexual woman constituted sex discrimination, which is explicitly prohibited in Title VII of the Civil Rights Act. The same hypothetical test when applied to transgender employees results in a similar outcome—a transgender employee who identifies as male or female and an employee whose identity aligns with his/her biological sex is still differentiated only by their sex assigned at birth. Firing the transgender employee, therefore, is based on sex and is in violation of Title VII.

Millions of LGBT employees across the United States will now be able to rest on the protections afforded by Title VII and bring claims forward, should they find themselves discriminated against. There is a tempering force in place, however, that could muzzle these newly-protected employees as they seek to hold employers accountable: Arbitration.

For those unfamiliar, arbitration agreements, provisions, or alternate dispute resolution clauses, are increasingly being included in workplace contracts, or in updated contracts, and require an employee’s acceptance if they are to start working or continue working in the company. Should an LGBT employee want to sue a company for discrimination, the employee would be barred from bringing the claim in a court of law, and must instead have the claim heard in private, confidential arbitration. This is an especially favorable arrangement for companies because each employee is forced, essentially, to fend for themselves since they cannot know how many other employees may be bringing the same claim forward, what evidence is being presented, or how others have fared in their own arbitration hearings.

As workplace protections expand and cover more employees, arbitration agreements represent a powerfully limiting way for companies to evade negative publicity and keep the playing field tilted in their favor. It is ironic that the same Justice behind the writing of the majority opinion that extended Title VII protections to LGBTQ employees would be the same Justice who limited workers’ ability, generally, to bring claims forward, by authoring the opinion enforcing arbitration agreements in Epic Systems Corp. v. Lewis.

The path forward is often circuitous and long overdue, but we cement progress whenever it’s made, and remain vigilant against those who seek to take it away.