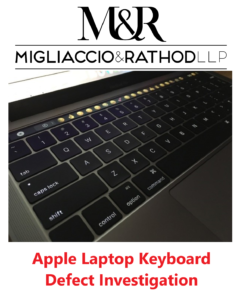 Migliaccio & Rathod LLP is investigating allegations of potentially costly premature keyboard failures in 2015-2017 Apple MacBook, 2016-2019 MacBook Pro (excluding the 16-inch model), and 2018-2019 MacBook Air laptops. In 2015, Apple released a new laptop keyboard design. Using butterfly switches instead of traditional scissor switches, the new design was thinner, allowing Apple to reduce the overall thickness of its laptops. But consumers report that Apple’s slimming of its laptops is coming at a big cost. The design and tight manufacturing tolerances of the butterfly switch keys allegedly make the keyboards more prone to getting jammed or stuck. Some reports indicate that Apple’s butterfly switch keys can even be rendered unusable by dust that finds its way under a key switch.

A failed butterfly switch can add significant costs to an already premium-priced laptop. Out of warranty repairs for a single key failure can range in price from $330 to $700. A recent report indicates that the failure rate of butterfly switch keyboards is twice as high as Apple’s prior keyboard design.

Have You Had a Butterfly Switch Failure on your MacBook, MacBook Pro, or MacBook Air Laptop?

If so, we would like to speak with you. Please complete the contact form on this page, email us at info@classlawdc.com, or call us for a free consultation at (202) 470-3520.

The lawyers at Migliaccio & Rathod LLP have years of experience in class action litigation involving defects in electronics, including in cases involving Apple devices. Our attorneys presently represent consumers in the iPhone slowdown class action. In 2015, we filed the first and only federal class action arising out of 2011 MacBook Pro GPU failures, which led to a nationwide recall and reimbursement program. In 2016, we represented consumers in the “Staingate” controversy, which also resulted in nationwide relief.  More information about our current cases and investigations is available on our blog.