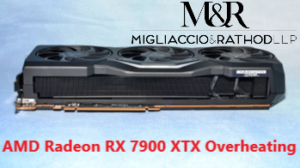 Migliaccio & Rathod LLP is currently investigating computer hardware company AMD for complaints of poor heat management in its Radeon RX 7900 XTX graphics cards, resulting in endemic overheating and slow performance due to thermal throttling. Many owners of the RX 7900 XTX have complained that GPU temperature regularly exceeds 110°C during standard use and that the performance of their graphics cards drops significantly when temperatures approach this level. Investigations into the issue indicate that a defective vapor chamber is causing the RX 7900 XTX graphics cards to poorly manage GPU heat. There is no known way for a consumer to remedy this issue with an at-home fix. Thus far, AMD has dismissed consumer complaints of overheating and throttling and refuses to accept returns of the RX 7900 XTX graphics card for those reasons. As a result, owners are left with an expensive, “high-end” product that nonetheless suffers from widespread thermal throttling and diminished performance that is far worse than advertised.

If so, we would like to speak with you. Please fill out the questionnaire below, call us for a free consultation at (202) 470-3520, or send an email to info@classlawdc.com.