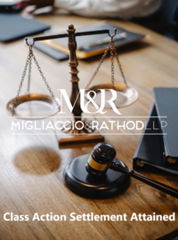 Our firm, Migliaccio & Rathod LLP, along with co-counsel, represented women who had been detained at Jackson Pike between May 23, 2011, and April 30, 2014, who had their civil rights violated. The case arose out of allegations that officers acted in violation of the unreasonable search and seizure provisions contained in the Fourth Amendment of the US Constitution by taking photographs of the women’s tattoos located in private areas.

The settlement entitles each impacted individual to a direct payment in excess of $2,000 per class member. Moreover, by virtue of this settlement, Franklin County must enact a policy prohibiting the photographing of tattoos of misdemeanor detainees and provide training for all employees on the new policy. Finally, the settlement requires that Franklin County seal all photographs of the aforementioned tattoos and destroy them within five years. More information can be found on the settlement site, linked here.

The final hearing will be held on May 12, 2022, with settlement distribution occurring after Judge Watson’s final approval.

If you were ever detained for a misdemeanor or infraction and had tattoos in sensitive areas photographed, please reach out to us for a free consultation.