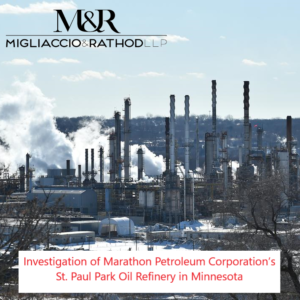 On October 13, 2021, the law firms of Migliaccio & Rathod LLP and Gustafson Gluek PLLC filed a class action lawsuit against Marathon Petroleum Corporation and St. Paul Park Refining Co. LLC. The lawsuit alleges that plaintiffs and members of the putative class have been deprived of the free use and enjoyment of their property because of the noxious odors, noise, debris particles, and fumes emitted as part of the Defendants’ operation of their St. Paul Park refinery. More than simply being nuisances, the refinery’s contaminants have been connected with causing deleterious health effects that endanger local residents. The complaint is available for viewing here.

Migliaccio & Rathod is currently investigating Marathon Petroleum Corporation’s St. Paul Park Oil Refinery in St. Paul Park, Minnesota for its pollution and contamination of the surrounding area in which citizens are subjected to the refinery’s emissions. The St. Paul Park Oil Refinery processes crude oil from the Bakken region of North Dakota as well as oil from Canada. It manufactures products such as gasoline, propane, asphalt, and refinery-grade propylene, to name a few, at the high production capacity of 98,000 barrels per day. The refinery opened in 1939 but has reached all-time high production rates within only the past 10 years.

Public records indicate that the St. Paul Park Refinery has released significant amounts of contaminants into the air and water, often beyond federally mandated levels, which may spread readily and directly into the surrounding area. It has, for those reasons, been fined many times by the federal Environmental Protection Agency beginning as early as 1998 and most recently in 2018 when the EPA determined the refinery emitted toxic chemicals at a rate 13x higher than allowed. EPA records indicated that the refinery has emitted excess Hydrogen Sulfide and Carbon Monoxide emissions on numerous occasions. According to the EPA, there have been 4 formal enforcement actions and 2 informal actions against the refinery in the past four years.

Neighboring residents in St. Paul Park and surrounding cities such as Newport, Cottage Grove, Inver Grove Heights, South St. Paul, and Woodbury have complained to the Minnesota Pollution Control Agency (MPCA) over the past 10 years. They note the “terrible odor outside [that] has been going on for over a week, and [is] now seeping into building[s]” that cause “headaches”, “tight chest” and make it “hard to breath”. Residents’ complaints indicate the ongoing release of Refinery contaminants resulting from Marathon’s continuing and ongoing operations at the St. Paul Park Refinery, as well as noise, odors, vapors and fumes, has been a blight on their community and deprives them of their free use and enjoyment of their property.

Are you a resident of St. Paul Park, Minnesota or the surrounding areas (such as St. Paul Park, Newport, Cottage Grove, Inver Grove Heights, South St. Paul, and Woodbury) who has been impacted by the Refinery’s pollution?

If so, we would like to speak with you. Please complete the questionnaire below so that we may evaluate your claims, send us your questions through the contact form on this page, at info@classlawdc.com, or give us a call at (202) 470-3520 for more information.

The lawyers at Migliaccio & Rathod LLP have years of experience in environmental litigation against large corporations. More information about our current cases and investigations is available on our blog.