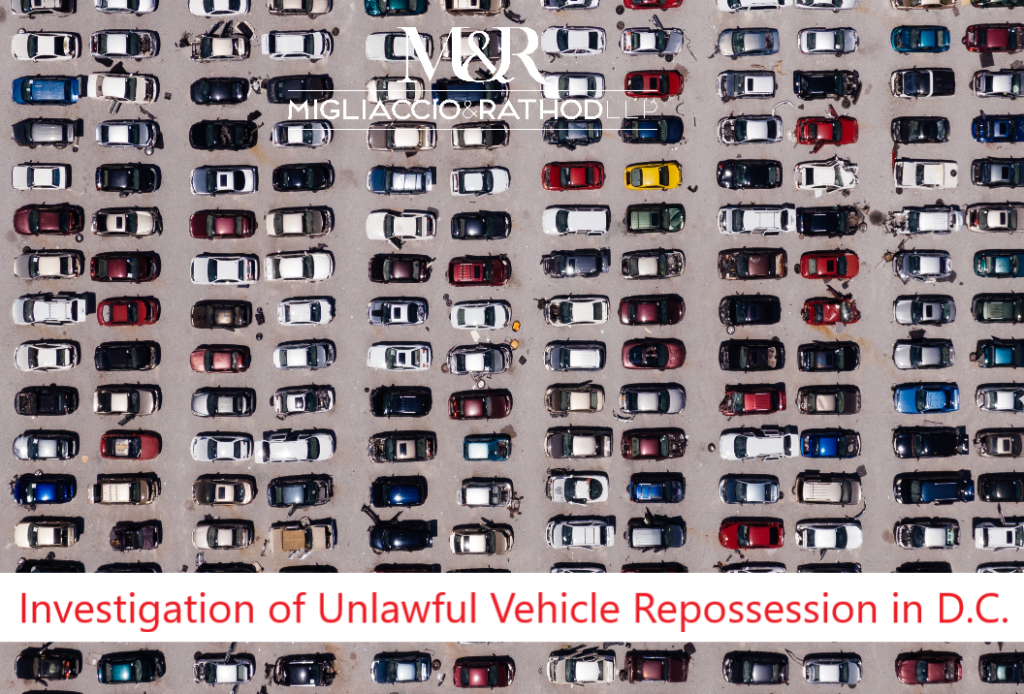 Migliaccio & Rathod LLP is investigating potential claims of illegal repossession of vehicles. Auto lending is booming in the United States, but Americans are increasingly unable to make payments on their vehicle loans, with over 7 million Americans who are 90 days late on their payments and the expectation that there will be a record number of vehicle repossessions in 2021.

Consumers who find themselves unable to make payments may fall victim to unlawful repossessions, those which fail to comply with strict requirements of the law. In recent years, our firm has successfully recovered tens of thousands of dollars for D.C. residents when lenders failed to follow proper procedures in repossessing vehicles. You could potentially be owed a substantial amount of money, too. In D.C., lenders must provide clear notice concerning the repossession at various stages:

Failure to meet any of the above requirements is a violation of D.C. consumer protection law and would automatically trigger at least $1,500 in damages (and potentially more).  or triple their actual damages for each unlawful act, whichever is greater. In addition, in D.C., repossessions are only legal if they are performed by or on behalf of D.C.-licensed lenders subject to D.C. lending regulations. In other words, repossession in D.C. by a Virginia-based lender that is not licensed in D.C. is unlawful because that Virginia lender is not subject to D.C.’s lending regulations. If an outside lender is licensed in D.C. but repossesses a vehicle whose interest rate exceeds the District’s legal limit, such conduct is also unlawful.

Our firm has successfully attained settlements in the past on behalf of consumers victimized by unlawful repossessions including against Transit Employees Federal Credit Union (“TEFCU”) and Navy Federal Credit Union. In late 2019, we secured a class action settlement valued at $215,000 on behalf of 54 individuals who were victimized by TEFCU’s unlawful repossession practices. Those individuals received, for each violation they experienced, a minimum of $1,046 as well as debt relief for any deficiency amount allegedly owed to TEFCU as a result of their vehicle’s repossession. On top of the monetary relief, class members could request a “tradeline deletion” erasing the repossession from their credit history. In late 2020, our firm once again successfully achieved a hefty settlement on behalf of consumers victimized by the Navy Federal Credit Union’s repossession practices. In this case, these practices included failure to notify individuals of vehicle storage location, which was often outside of The District, price for vehicle recovery, and sell vehicles in public auction after informing consumers that they would be sold separately. This suit ended with a settlement worth $800,000 through which each impacted individual received no less than $748, most receiving more based on the number of laws violated in their repossession. Some also received tradeline deletions, as in the TEFCU suit.

Are you a Washington, D.C. resident whose vehicle has been repossessed by a credit union you suspect violated any of the above laws?

We are especially interested in investigating the following credit unions out of D.C.:

If so, we would like to speak with you. Complete the questionnaire below or, if you have further questions, contact us through the contact form on this page, info@classlawdc.com, or give us a call at (202) 470-3520.