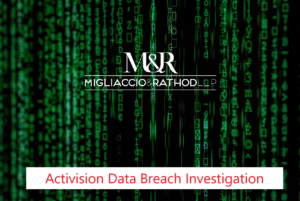 Migliaccio & Rathod LLP is currently investigating Activision for failure to adequately safeguard user data, resulting in a data breach of Call of Duty Players. On September 20, 2020, Activision’s Call of Duty platform was hacked into and over 500,000 accounts were accessed as a result. The hack seems to be a result of a credential stuffing attack through which hackers use stolen credentials from one platform to access as many accounts as they can find with the same credentials. Impacted gamers learned that in this case hackers gained full account information and access and in some cases publicly released the information. Many were locked out of their accounts and those unaffected were warned by fellow gamers to change their passwords, add their own 2 factor authentication, and unlink all associated accounts as quickly as possible. If consumers used Activision login information on other sites, they were warned to additionally change and monitor those accounts as well to avoid further credential stuffing attacks.

Activision released a statement ensuring consumers that there had not been any data breach and that Call of Duty gamers information was still secure. Unfortunately, gamers experienced a very different reality in losing access to their accounts and viewing the publicly leaked accounts. Consumers allege that Activision itself does not have multi-factor authentication nor does it allow certain special characters or passwords longer than 20 characters, limiting consumers’ ability to secure their accounts.

Are you an Activision account holder who may have had their account information impacted by this September 2020 data breach?

If so, we would like to hear from you. Please complete the questionnaire on this page. If you have further questions, complete the contact form, send us an email at info@classlawdc.com, or give us a call at (202) 470-3520.