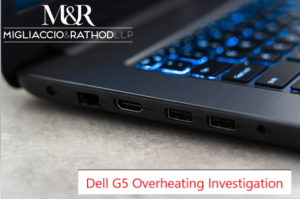 Migliaccio & Rathod LLP is currently investigating Dell for complaints of endemic overheating in their G5 Series gaming laptops, causing significant slowdowns and disruptions. These complaints conflict with Dell’s representation of the G5 Series as a speedy and effective gaming platform. Consumers contend that the laptops grow hot to the point of discomfort, which also leads to reduced functionality in speed and consistency of processing. Even upon short periods of use, there are audible signs of the fan struggling to keep up, as well as visual cues such as the screen stuttering, the system pausing, or even complete battery failure. In order to turn back on after overheating, some report having to plug the laptop into an outlet because the battery drains itself.

Customers report that toggling their power output settings, for example undervolting the laptop, can sometimes temporarily alleviate the overheating issue, but that this measure seriously diminishes the laptop’s usability as a gaming device. Similarly, many other makeshift fixes, such as unplugging the laptop from a permanent power source in order to reduce heat, often slow down the processing system and contradict the battery failure described above. Consumers have repeatedly notified Dell of these issues, but Dell has thus far failed to adequately respond to reports of their product’s failure to live up to promotional representations.

Are you a Dell G5 customer who has experienced repeated overheating and consequent reduced functionality of your product?