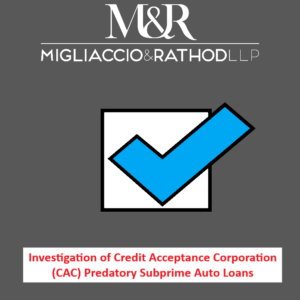 Migliaccio & Rathod LLP is investigating potential claims of predatory subprime auto lending by the Credit Acceptance Corporation (CAC) across the United States. The Massachusetts Attorney General (AG) recently sued and settled a case against CAC regarding their alleged unfair practices in relation to these subprime auto loans. Specifically, CAC is said to have offered high interest loans to customers that they knew or could have reasonably known would be unable to meet payments. These customers, often from already marginalized communities, then defaulted on loans, resulting in loss of their vehicles or loss of down payments while CAC profited on their calculated misfortunes. In some cases, customers claimed that they were additionally preyed upon through hidden finance charges which CAC utilized to circumvent statewide usury caps. The settlement allocates more than $27 million in relief as well as debt forgiveness and credit repair to impacted individuals living in Massachusetts who were victimized by the corporation’s conduct. The settlement similarly mandates that CAC make changes to its loan handling practices.

Migliaccio & Rathod suspects that CAC’s predatory lending does not stop in Massachusetts and is investigating instances of these practices in other states and the District of Columbia.

Are you a borrower of CAC, outside of Massachusetts, for an auto loan that you suspect has an unreasonably high interest rate?