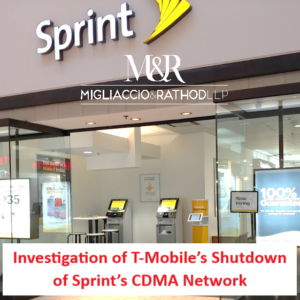 UPDATE: Migliaccio & Rathod has filed a class action lawsuit against T-Mobile in the Western District of Washington. View full details in the complaint here.

Migliaccio & Rathod LLP is currently investigating T-Mobile & Sprint, who merged back in 2019, for their failure to integrate networks and subsequent failure to meet Sprint customers’ contracted service needs. Sprint’s CDMA network is incompatible with T-Mobile’s current configurations, so T-Mobile has decided to shut down Sprint’s CDMA network entirely. In turn, any the cell phones which cannot access Sprint LTE and depend entirely on this network will be left out to dry. This, too, comes after the announcement of the cancellation of T-Mobile’s 3G network, already throttling many other customers’ service. Many consumers are now burdened with scrambling to upgrade their phone to ensure their own uninterrupted network compatibility. T-Mobile just began sending out notice to customers with cell phones compatible only with the CDMA network to inform them of the change to be made, which will result in their loss of service, effective January 1, 2022.

Consumers complain that T-Mobile has outsourced the burden of upgrading these devices, including the financial burden, onto them. They are being made to prematurely pay off their phones and upgrade to newer devices only to receive the service for which they presumed to have paid.

Are you a Sprint customer who purchased a CDMA capable device, not knowing that it would lose service after Sprint & T-Mobile completed their merger?

If so, we would like to hear from you. Please complete the questionnaire below, send us an email at info@classlawdc.com, or give us a call at (202) 470-3520.