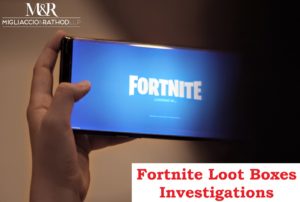 Migliaccio & Rathod LLP is currently investigating Epic Games, Inc. for perpetuating a scheme to induce players of its video game Fortnite: Save the World, who are largely minors, to spend inordinate amounts of money on in-game “loot boxes,” stylistically represented as llama piñatas that players break open. In industry jargon, a loot box is a virtual item that grants players access to a random assortment of in-game accessories, some of which can improve players’ gameplay performance. From the game’s launch in July 2017 through February 2019, Epic Games deceptively utilized this loot box model in the marketing and operation of Fortnite: Save the World and its Llama Piñata system, pressuring players to either purchase Llama loot boxes or endure a sub-par gameplay experience.

Players purchase Llamas using “V-Bucks,” the title’s in-game currency, which in turn can either be earned via in-game activity or purchased outright. However, due to the inconsistent and time-consuming nature of earning V-Bucks in-game, many choose to purchase them. Moreover, since Llama rewards purport to offer gameplay aids, which could facilitate the process of earning V-Bucks, players may intend to make a one-time purchase to help them start the game. Indeed, players need the rewards offered by Llamas in order to meaningfully progress in the game. However, up through February 2019, Llama rewards were random and, despite in-game descriptions indicating the potential for a high yield, the odds of receiving lucrative rewards were astronomically low. Some players report purchasing dozens of Llamas, only to receive one or two items of high value. With 100 V-Bucks roughly equaling $1.00 and Llamas costing upwards of 1,500 V-Bucks, purchasing a dozen or more Llamas could easily cost hundreds of real-world dollars.

Again, most of Fortnite: Save the World’s players are minors and thereby unable to understand the near-zero probability of reaping a meaningful reward from a Llama purchase, or appreciate the financial implications of these purchases, which Epic Games does nothing to curb or discourage. On the contrary, the representation of the loot box model as a cartoony Llama Piñata seems to actively cater to younger players. As noted, Epic Games modified the Llama Piñata system in February 2019 as to allow players to see exactly what any given Llama contains, rather than relying on the random reward “loot box” system. Epic Games CEO Tim Sweeney even delivered a recent keynote speech decrying the prevalence of the loot box model. However, Epic has not offered a refund for Llama purchases made prior to the February 2019 update or granted relief to all those negatively impacted by its deceptive marketing and manipulative trade practices.

Are you a Fortnite: Save the World player or the parent of a player who purchased V-Bucks prior to the February 2019 update?