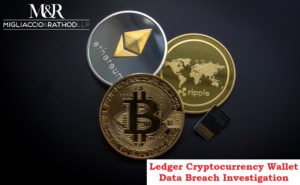 Migliaccio & Rathod LLP is currently investigating Ledger SAS, a hardware cryptocurrency wallet maker, for failure to adequately safeguard consumer information, resulting in a data breach. Initially reported in July, the data breach involved the exposure of the more than one million email addresses subscribed to Ledger’s newsletter, as well as more detailed contact information for the 272,853 customers who purchased a Ledger device. For this latter subset, the compromised information includes:

On December 21st, a threat actor shared both sets of stolen information on a well-known hacker forum for free. Other cybersecurity analysts believe the information was already being sold privately, starting in August 2020. Since October 2020, many Ledger users have been targeted by elaborate phishing scams seeking to gain access to their 24-word recovery phrases, which would allow hackers to then steal their cryptocurrency assets. (The 24-word recovery phrase was not compromised in the earlier data breach.)

With this recent leak of additional personal information, Ledger users’ can expect an uptick in both the number of phishing attempts and their level of complexity. At least one customer has been the target of multiple “scareware” attacks, where threat actors use the compromised information to generate shock and anxiety in their targets, as to more easily manipulate them. This user shared on social media the template of a threatening email he received, where the sender threatened physical harm to the user and his property unless a financial demand was met.

Ledger’s CEO recently said that the company has no intention of reimbursing customers who have been impacted by the data breach.

Are you a Ledger user or newsletter subscriber whose personal information was compromised in the June 2020 data breach and later shared to prominent hacker forums? Complete the questionnaire below!