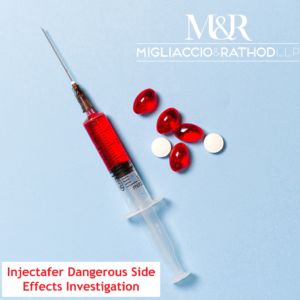 Migliaccio & Rathod LLP is currently investigating the pharmaceutical manufacturers of the widely used iron-deficiency anemia drug, Injectafer. Injectafer has been used to rapidly correct anemia, however conclusive to various recent clinical trials, it has been directly linked to Severe Hypophosphatemia as well as weakened bone density. Hypophosphatemia is a dangerous, potentially fatal, phosphorous deficiency which, in one study, was apparent in 75% of Injectafer patients. Further, Injectafer, even after only one course of use, has been associated with patients’ osteomalacia, which is bone softening as a result of Vitamin D deficiency, and consequent bone fractures. In fact, Injectafer patients developed a range of subsequent symptoms and illnesses including, but not limited to:

Patients have alleged that the manufacturers of Injectafer have failed to adequately warn and them about these significant and serious side effects.

For these reasons, the FDA initially rejected the release of Injectafer, only eventually approving the drug’s use for a restricted set of patients who, for example, did not tolerate other iron supplements. As of February 2020, the FDA updated their guidance on Injectafer to include these substantial warning signs regarding Hypophosphatemia. Moreover, the United States District Court for the Eastern District of Pennsylvania permitted a lawsuit against manufacturers and designers of Injectafer’s misrepresentation of their product and failure to protect consumers. This lawsuit and various others have begun working their way through the court system in order to hold these manufacturers accountable for their patients’ suffering.

Did you have an infusion of Injectafer as a rapid iron supplement and fear you may have developed any of the above symptoms or illnesses?

If so, we would like to speak with you. Please complete the contact form on this page, send an email to info@classlawdc.com or call us at (202) 470-3520 for more information.