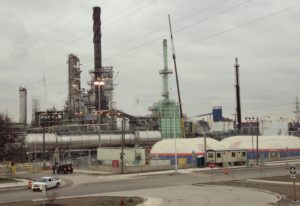 Migliaccio & Rathod LLP is pleased to share that neighbors of the Marathon Oil refinery in southwest Detroit are one step closer to justice. Residents faced an initial setback after their case was dismissed by the U.S. District Court for the Eastern District of Michigan, on the basis that the statute of limitations had expired because plaintiffs failed to show that the fumes that injured them began within three years of filing suit. A three-judge panel for the Sixth Circuit Court of Appeals has unanimously overruled that decision, however, finding that the plaintiffs need not make such allegations as they have sufficiently alleged that Marathon’s conduct continuously gives rise to claims that restart the statute of limitations. As the Court of Appeals put it, “Marathon’s alleged wrongful conduct is the ‘generation, creation, release, emission and discharge of refinery contaminants.’ Thus, each discharge is a violation giving rise to a separate claim.” Migliaccio & Rathod LLP along with co-counsel German Rubenstein LLP, Nidel & Nace PLLC, the Oliver Law Group PC, and Sugar Law represents the Plaintiffs.

Residents allege that they have had to endure foul odors, poor air quality, and loud noises coming from the refinery that interrupted and negatively affected their quality of life. The decision by the Court of Appeals remands the case to U.S. District Court, thus giving the case new life and neighbors of the Marathon oil refinery new hope. If you live near the Marathon Oil refinery in Detroit, and are not yet formally part of the lawsuit, we would like to speak with you. Please contact us at 202-470-3520, email us at info@classlawdc.com and/or fill out the contact form at the bottom right-hand corner of this page.

The lawyers at Migliaccio & Rathod LLP have years of experience in environmental litigation against large corporations. More information about our current cases and investigations is available on our blog.