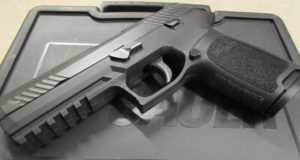 Purchasers of the Sig Sauer P320 striker-fired pistol are reporting that Sig Sauer made promises regarding conversion kits for the pistol that have proven to be untrue. Specifically, Sig Sauer promised “unprecedented modularity” with the P320 that would allow users to switch between 9mm, .357, .40 and .45 caliber with a relatively simple conversion kit sold by Sig Sauer.

Did you expect to be able to convert your P320 with a 45 conversion kit?

If you purchased a Sig Sauer P320 in anticipation of being able to purchase and use a 45 conversion kit, our attorneys want to speak with you. Please contact us by phone, at (202) 470-5320, or by filling out the form on this page.

The P320 won the U.S. Army’s Modular Handgun System competition in January 2017. Since then, numerous online sources have alleged that the P320 is prone to accidentally discharging when dropped. A police officer filed a multi-million dollar lawsuit in 2017 against Sig Sauer after being injured when his P320 allegedly discharged after hitting the ground.

On August 8, the Dallas Police Department allegedly announced that they were removing the P320 from their approved-carry list pending an investigation into the drop-safety of the P320.

Soon after safety concerns about the P320 went public, Sig Sauer issued a voluntary upgrade program for P320 pistols that reduces the physical weight of the trigger, sear, and striker while additionally adding a mechanical disconnector

Has your P320 Accidentally Discharged?

If your P320 has accidentally discharged, do to a drop or some other accident, please contact our attorneys right away by calling us at (202) 470-5320, or by filling out the form on this page.